I have a choice of puppies now. Here's the back story. Friday morning was a mess of cold and rain.

wulfwalker her whimpering in the gully behind her house. She found a single black Labrador puppy both very cold and very hungry. Some hours later she had six lab puppies retrieved from the gully. She warmed them up, fed them lots of food, and put them in with the other dogs. Aurora, the alpha female, almost took them on as her own puppies.

At the end of day

wulfwalker canvased the neighborhood and found out where the puppies had come from. The owners "owned" the puppies mother and were not taking care of her or the puppies. It appeared that the puppies had followed their mother into the gully area and then become entangled in the vines. The short of the long is that the puppies will be taken to the animal shelter. I chose to adopt one after Wulfwalker brought me by to see them. I picked one that I've called Boomer. That should have been it. We got back to the house and fed the big dogs. We then heard another puppy whining in the distance. A search of the gully revealed another one of the lab puppies. It was the single puppy with a white paw. We've named him Gulliver. He was the first puppy that Wulfwalker rescued on Friday. Gulliver is cute, sweet and calmer than Boomer.

Here is my dilemma. Gulliver was not available when I chose Boomer from the crowd of this brothers and sister. Now I have to decide which one to keep. It is almost like a TV reality show. Anyway, here are some pictures of Boomer, Gulliver and a stray cat (Osiris!) 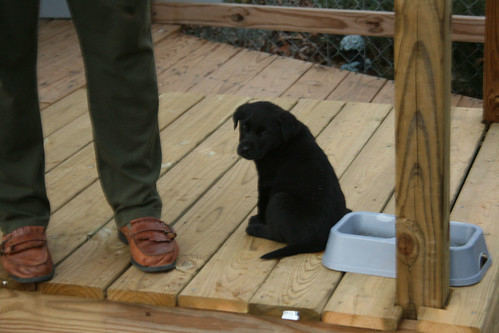