My lovely mate and I get a weekly or monthly laugh from the Monty Python skit "How Not to Be Seen". Usually one of us is talking about hiding in plain sight, and both our minds go to the skit. Interestingly, this is how I feel I live my life much of the time. All the hats I wear are not mutually compatible, and some are downright contrary. Does anybody else live like this??? Anyway, here is the picture of the day and the script from "How Not to Be Seen". 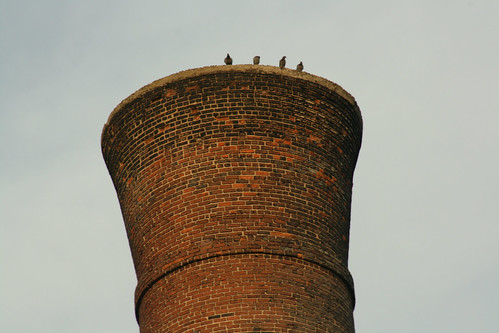 How not to be seen: sit on the top of a very tall smokestack...

As featured in the Flying Circus TV Show - Episode 24

Cut to a wide-angle shot of hedgerows, fields and trees. Voice Over (John Cleese): In this picture there are forty people. None of them can be seen. In this film we hope to show you how not to be seen.

Voice Over: In this film we hope to show how not to be seen. This is Mr. E.R. Bradshaw of Napier Court, Black Lion Road London SE5. He can not be seen. Now I am going to ask him to stand up. Mr. Bradshaw will you stand up please

In the distance Mr Bradshaw stands up. There is a loud gunshot as Mr Bradshaw is shot in the stomach. He crumples to the ground

Voice Over: This demonstrates the value of not being seen.

Cut to another location - an empty area of scrubland

Voice Over: In this picture we cannot see Mrs. B.J. Smegma of 13, The Cresent, Belmont. Mrs Smegma will you stand up please.

To the right of the area Mrs Smegma stands up. A gunshot rings out, and Mrs. Smegma leaps into the air, and falls to the ground dead. Cut to another area, however this time there is a bush in the middle

Voice Over: This is Mr Nesbitt of Harlow New Town. Mr Nesbit would you stand up please. (after a pause - nothing happens)Mr Nesbitt has learnt the value of not being seen. However he has chosen a very obvious piece of cover.

The bush explodes and you hear a muffled scream. Cut to another scene with three bushes

Cut to a shot of a farmland area with a water butt, a wall, a pile of leaves, a bushy tree, a parked car, and lots of bushes in the distance

Voice Over: Mr Ken Andrews, of Leighton Road, Slough has concealed himself extremely well. He could be almost anywhere. He could be behind the wall, inside the water barrel, beneath a pile of leaves, up in the tree, squatting down behind the car, concealed in a hollow, or crouched behind any one of a hundred bushes. However we happen to know he's in the water barrel.

The water barrel just blows up in a huge explosion. Cut to a panning shot from the beach huts to beach across the sea

Voice Over: Mr. and Mrs. Watson of Ivy Cottage, Worplesdon Road, Hull, chose a very cunning way of not being seen. When we called at their house, we found that they had gone away on two weeks holiday. They had not left any forwarding address, and they had bolted and barred the house to prevent us from getting in. However a neighbour told us where there were.

The camera pans around and stops on a obvious looking hut, which blows up. Cut to a house with a gumby standing out front

Voice Over: And here is the neighbour (he blows up, leaving just his boots. Cut to a shack in the desert) Here is where he lived (shack blows up - cut to a building) And this is where Lord Langdin lived who refused to speak to us (it blows up). so did the gentleman who lived here....(shot of a house - it blows up) and here.....(another building blows up) and of course here.....(a series of various atom and hydrogen bombs at the moment of impact)